First, in some sense, those original poles of the ’40s and ’50s were much stronger than poles today. I don’t have a scientific explanation, but just a feeling. During the early years, poles were harvested from old-growth forests which means the growth rings were much tighter together making them somewhat stronger. The poles today are not original old-growth wood and have growth rings that are wider apart. Now that doesn’t mean the same 35-foot pole put in today will fall down and the old pole will stand longer because the wood pole specifications for strength are still the same. However, today’s poles are bigger in circumference than older poles making up for the strength differential.

Another fact I like to share is how copper wire was used and why. Back in the early ’40s and ’50s most of the aluminum was going towards the war movement just about the time rural America was getting its lights turned on – for the first time. There were a lot of lines built and services installed during that time. Without aluminum, copper was used to making the wire with some still in service today. The wire wasn’t all copper though, small amounts of steel were added to give the wire the ability to stay in the air. This wire came to be called copper-weld wire. I know here at Custer Public Power District, we still have about 100 miles of that kind of wire still serving customers.

In today’s world, after many years of service and galloping in the wind and ice, the old copper-weld wire becomes not only elastic but also brittle.  From a safety perspective, this wire tends to get “thin” or brittle at the point where it’s tied to something like an insulator. This is one very good reason Custer Public Power District will not work on any structure with copper-weld wire on it while the line is energized.

In Custer Public Power District’s 10-year plan, there is a plan to replace this type of wire to maintain a safe and reliable system. All the while, remembering that copper-weld wire and the poles from the old-growth forests are what built the system in the early days of Custer Public Power District and helped us get electricity to the farms and ranches in our service territory.

Custer Public Power District was established in 1944 to serve rural Nebraska.   Our District takes pride in providing safe, reliable, and affordable power to our service territory as it did in the beginning, and empowering progress for our neighbors, friends, and family for today. 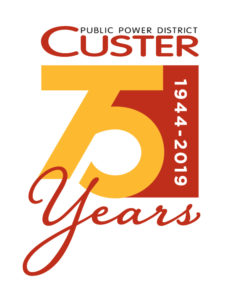